The yin and yang of Ibiza

I just got back from the White Isle (so called for its salt trade some centuries ago), where my deputy editor, Naz, and I spent seven heavenly days at a glorious, historic villa in the north of the island, overlooking the pine-covered hills. It was far better than any modern-day villa because this place had character: lots of old stone steps and over-head beams inside the house itself, with beautiful, well-established gardens surrounding it. Sitting sunning ourselves by the pool was a favourite pastime, as was attending the yoga sessions each morning with Arun, a knowledgeable, highly spiritual teacher who moved from London to Ibiza last year for a change of pace.

But our main reason for being there was to attend Hazel Lee’s psychic development course – the final retreat of the spring, hosted by Psychic Retreats – that took place over three intense days of teaching. During that time, we were all challenged to do tarot readings for each other and strangers, often being pushed out of our comfort zones. At times I wanted to give up as I had only ever received readings, and never given them myself; but Hazel believed in us all, and told me I was a natural psychic – I just needed to stop thinking so much. ‘Thinking is bad for you!’ she would bark at me over and over. And she was right. By the time it came to psychometry, I did far better at getting ‘hits’ i.e. accurate information, when I relaxed and just said what had come into my mind, rather than trying to force something to come through.

The intense teaching was balanced out with relaxing trips to nearby scenic places of interest, such as two beautiful beaches at either end of the island. And at the end of the retreat, we tagged three nights of partying on to our stay. So it truly was like experiencing the ‘yin’ of the relaxed retreat environment, discussing philosophy, life, love and death, with the ‘yang’ of the drinking, partying, up-til-the-crack-of-dawn lifestyle Ibiza is probably best known for. And though I love dancing, I now realise I mostly crave a quieter, more contemplative way of life. I’d choose a week at Psychic Retreats over a week of hard partying any day. Dancing on a beach watching the sun set, to the beat of dozens of drums, was far more enjoyable than sweating away in Space nightclub, being trodden on, having drinks spilled over me and having to fend off lots of weird men! Not good. 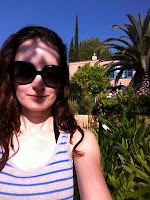 But Ibiza has had this dual personality for decades, and will continue to do so. That’s not to say one way of life is wrong, or one is ‘better’ than the other; to say that would be dualistic and limiting. Sometimes a bit of hedonism can be fun after all! But life is always full of choices over where and with whom you spend your time; it all comes down to priorities, which change as you get older and learn more about yourself. And though I can’t predict the future, despite developing my psychic and intuitive skills somewhat, I know I want to return to Ibiza and to the beautiful villa – even though one of the rooms is supposedly haunted by the guy who built the place! – because it was an incredible holiday I’ll never forget.
Katy and Golnaz stayed in Ibiza courtesy of Psychic Retreats. Week-long and four-day weekend courses will be held this Autumn, beginning in October. For more information, visit psychicretreats.com or call Lucia Diamond on +34 615 471 587. There will be a full write up in the August issue of Soul&Spirit magazine, on sale July 15.
Posted by Katy Louise at 12:32